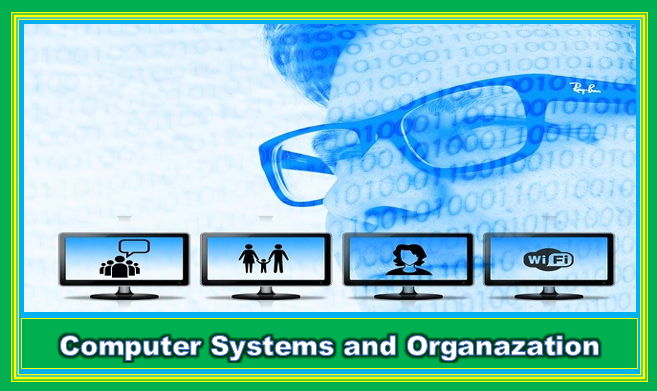 Computer Systems and Organizations is Unit 1 of CBSE Computer Science class 11. You can download
class 11 computer science chapter 1 pdf linked in this article.

Introduction to Computer Systems and Organization

In today’s life computers plays a vital role in our day-to-day life. We are surrounded by computers nowadays. Most of our daily work is directly or indirectly connected with computer systems. Let’s discuss what is a computer system?

The computer systems and organization is a set of following components:

Hardware: Hardware is the tangible parts of computer systems such as Keyboard, Mouse, Hard Disk, Motherboard, etc.
Software: Software is the programs stored in computers those help to do user’s work and provides an interface to the user such as Microsoft PowerPoint, Excel, Adobe reader, etc.

There are four main functions of the computer system:

Insights of Computer Systems and Organization

The computer system is just like an organization with different units. All units have their own functional parts or units to do a specific task. Look at the following diagram:

Its work like a manager of a company. It accepts a request from Input unit, then guides, directs, controls and governs the performance of the computer. It has three functional units:

1. CU (Control Unit): It accepts the request from CPU and does not perform any task itself. It determines, guides and control the request and then send it to ALU.

2. ALU (Arithmetic and Login Unit): ALU accepts the request from CU and performs the required task. It checks the request for what kind of task to be performed such as arithmetic operation (Addition, Subtraction, Multiplication or Division) or Logical comparison such as (Less Than, Greater Than etc.). After completion of the task, it sends the request to the next unit.

3. MU (Memory Unit): It is the next functional unit of computer organization. It is responsible for storing data into computer storage locations. It stores data permanently or temporarily. Further MU is divided into two kinds of memory as follows:

The memory is main part of Computer Systems and Organization.

Primary memory is also known as the main memory. Primary memory is a space where users can open their files for work. It works just like a table or desk in our offices. It saves data temporarily. It is classified as into the following categories:

Data can be accessed randomly. It is volatile memory i.e. when power gets off data will be lost.

It plays an important role in performing POST(Power On Self Test). It will check all the connected devices are working properly or not. Data cannot be edited once written.

It is used to increase the speed of operations of CPU. It is placed between RAM and CPU. It stores the copies of data from frequently accessed memory locations that reduce the average time required to access data. This memory is examined first when the CPU needs some data.

IO and Battery are two devices which are performing the tasks of supplying input and output power in Computer Systems and Organization.

Memory units helps to decide the capacity and requirements of storage in Computer Systems and Organization.

As discussed earlier software is a program written in the programming language that allows doing specific tasks in computer. It is abbreviated as SW or S/W often. User needs to install them before use. There are two types of software:

In Computer Systems and Organization, software plays vital role n operations. A computer is just like a rectangular box of hardware without software. The system software is responsible to perform some internal tasks of a computer system. There are two types of system software

The primary function of the Operating System is to provide a platform to user and make the computer usable. It allows to make the hardware run competently. The tasks of the operating system are device management, process management, user management etc. There are different types of OS such as Single User OS, Multi-User OS, Time-sharing OS, Real-time OS, Multi-tasking OS, Distributed OS etc.

Application software carries out the important functions for Computer Systems and Organization with the help of programs. It provides special services or a specific task. This software is written by programmers to serve users as per their requirement. It is subdivided into categories such as Packages, Utilities, Customized Software, and Developer Tools.

Customized Software refers to tailor-made software that provides functions as per the requirement of people such as ERP software, Payroll Software, Hotel Management, Reservation System etc.

I hope you enjoyed the article Computer Systems and Organizations. Share this article with your friends.

Follow this link for computer System and Organizations Class 11 questions and answers:

Follow this link for Practical Questions for Class 11 Chapter 1:

Click here to read all contents of Computer Science.