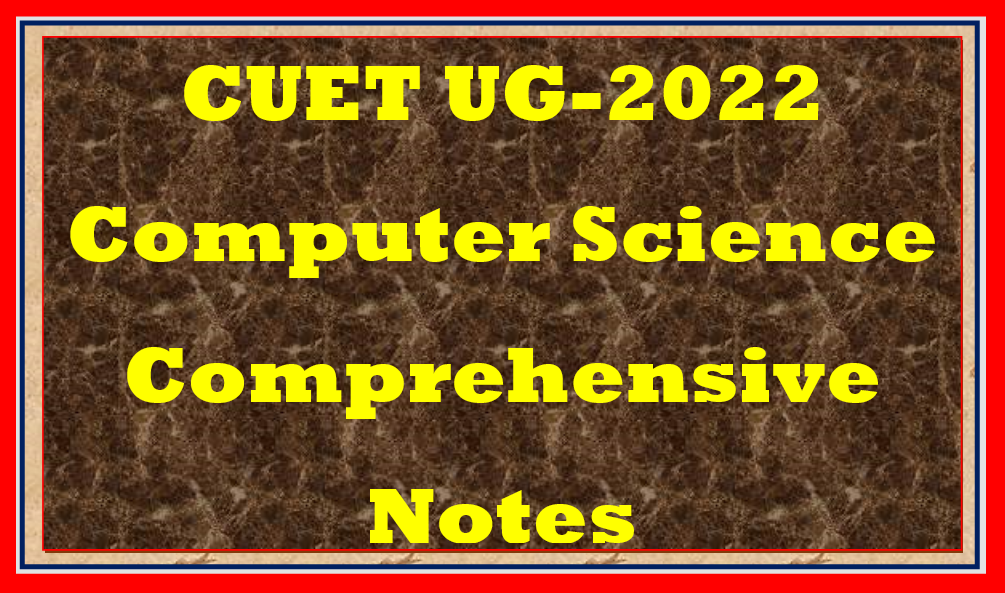 In this article, CUET Computer Science Informatics Practice 308 comprehensive notes I am going to discuss the content in detail. So here we go!

I have already written one article for CUET Computer Science Informatics Practices 308 syllabus. Follow this link to download and understand the same.

Let us begin the article with Section A. Section A which is compulsory for all students. So here we go unit-wise notes for CUET Computer Science Informatics Practices 308. Let’s begin!

This section contains notes for CUET UG 2022 Computer Science Section A. From this section 15 questions will be asked which are compulsory for all candidates. Explore the contents now!

What is an exception?

While compiling the programs sometimes the program will not return the desired output. It generates garbage output or the program behaves abnormally. This can happen due to syntax errors, runtime errors, or logical errors.

Before understanding exceptions you need to understand different types of errors.

Every programing language follows some rules and regulations for writing programs. When these rules are not followed while writing the program, syntax errors occur. It is also known as parsing errors.

In python when a syntax error occurs python will now allow going ahead in the program until errors are rectified. Python returns the Name of Error and a small description of the error. Observe the following screenshot.

So the syntax error is displayed in the interactive mode or python shell window.

If you are working in script mode it will return the error in the Error Dialog box with the title SyntaxError and description with the OK button. Observe the below-given screenshot.

The script mode won’t allow you to go ahead until this error is rectified in the program. The syntax error will be returned by python itself.

The program is syntactically correct but having issues that are detected during only the program execution is known as runtime errors. It cannot be detected by python itself.

To fix them you have to correct the code according to the program.

Now let’s understand what is an exception?

“An exception is an event, which occurs during the execution of a program that disrupts the normal flow of the program’s instructions.”

An exception is a Python object that represents an error. When an error occurs during the execution of a program, an exception is said to have been raised.

Commonly occurring exceptions defined by the compiler/interpreter is known as a built-in exception.

Python standard library contains an extensive collection of built-in exceptions. When any of these exceptions occur in the program, the appropriate exception handler code is executed and displays the reason and name of that exception. The programmer has to take appropriate action to handle it.

Python supports some built-in exceptions which are as follows:

The user can also create their own exception in the program as per their requirements. These exceptions are called user-defined exceptions.

Python supports two kinds of statements to create user-defined exceptions. They are:

It is used to throw an exception. The syntax of the raise statement is as follows:

It is used to test an expression in the python program. If it returns the result False then the exception is raised. This is generally used at the beginning of the function or a function call to check for valid input.

In the above code, the assert statement evaluates the value for a given number. If it is even then it prints the message “x is even no.” when it evaluates False then it raises AssertionError.

When the user writes an appropriate code in a program to display proper messages or instructions to the user when an exception is raised is called handling exceptions.

The need for exception handling is very crucial for programs to avoid abnormal crashing of the program. Following are some important points regarding exceptions and their handling:

How to handle exceptions in Python

Python automatically creates an exception object when an error occurred in the program. This object has information such as:

This object is passed on to the run time system to find a suitable code to handle the exception. This process is called throwing an exception.

Exception handler refers to a block of code which handle raised exception. It will search the following:

This exception handling is going to execute the code in hierarchical search is called a stack.

When it founds the suitable handler is found in the call stack it is executed by the run time process. This process is known as catching the exception.

If the stack is unable to find a suitable exception then it stops the program. The entire process is explained in the following diagram:

To catch exceptions try and except blocks are used. An exception is said to be caught when a code that is designed to handle a particular exception is executed.

In the above code, n is printed without declaring a variable so it raises NameError which is caught in except in block.

Multiple exceptions can be caught by using except block multiple times.

The try-except-else block is used to handle the exception in the case when there is no known error or exception and none of them except block is executed else clause will be executed.

The finally clause must be placed at the end of the exception handling code after all except blocks and else block.

recovering and counting in finally

If an error has been detected in the try block and the exception has been thrown, the appropriate except block will be executed to handle the error. But if the exception is not handled by any of the except lauses,
then it is re-raised after the execution of the finally block.

If any other type of error occurs for which there is no handler code (except clause) defined, then also the finally clause will be executed first.

While executing the above code, if we enter a non-numeric data as input, the finally block will be executed. So, the message “OVER AND OUT” will be displayed. Thereafter the exception for which handler is not present will be re-raised.

After execution of finally block, Python transfers the control to a previously entered try or to the next higher level default exception handler.

We have already covered this topic in Section A. Refer to Section A for notes on this topic.

The remaining chapters will be updated soon.

CUET UG 2022 Syllabus Section B2 contains the topics from Informatics Practices. From this section 35 questions will be asked out of this 25 questions need to be attempted.

Follow this link for all chapters of Section B2: Informatics Practices Class 12.