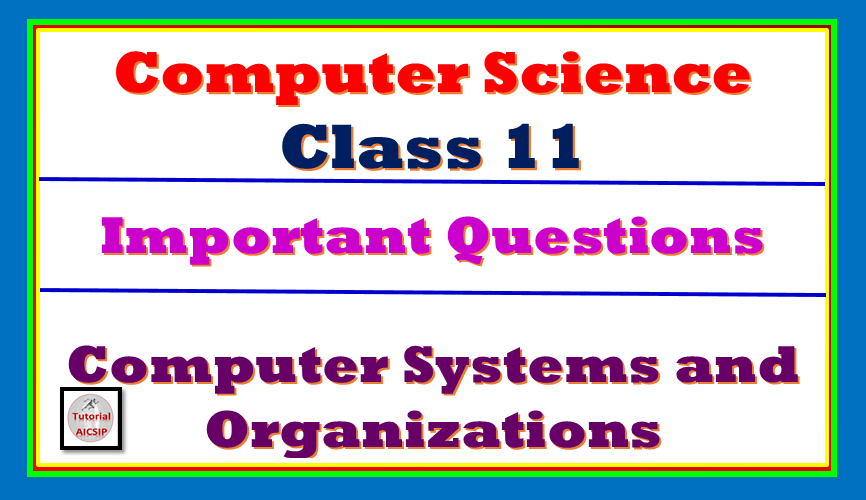 Important QnA Basic computer organization class 11, we will discuss a few questions and answers through this article. So here we go!

Now in the next section of Basic computer organization class 11 we are going to discuss subjective type questions.

This section of Basic computer organization class 11, will discuss questions for 2 or 3 marks.

Q – 5 Explain the functions of the CPU in detail.
Ans.: The functions of CPU are as follows:
1. Accepts input requests from users.
2. It works like a manager of the company.
3. It guides, directs, controls and governs the performance of computer
Q – 6 Identify the following memory:
Q – 7 Write equivalent memory units of the following:

In the next topic of Basic computer organization class 11 we are going to discuss memory topic.

Ans.:
A hard disk is a secondary storage device that is used to store data. It contains one or more plates in a circular form that rotates continually. These circular plates are coated with a magnetic material and stacked with space between them. The information is recorded on the surface of rotating disks by magnetic heads as tiny magnetic spots. Nowadays we have harddisks with a capacity of terabytes.
Q – 9 Name the types of software.
Ans.: There are two types of software.

Q -10 What do you mean by system software?

Q – 12 What are the types of language processors?

Ans.: The types of language processors are as follows:

Q – 13 What do you mean by Application Software?

Ans.: An application software is designed to perform specific tasks. They can only perform only the task which they are meant for.

Q – 15 Write the application software used to do the following tasks: