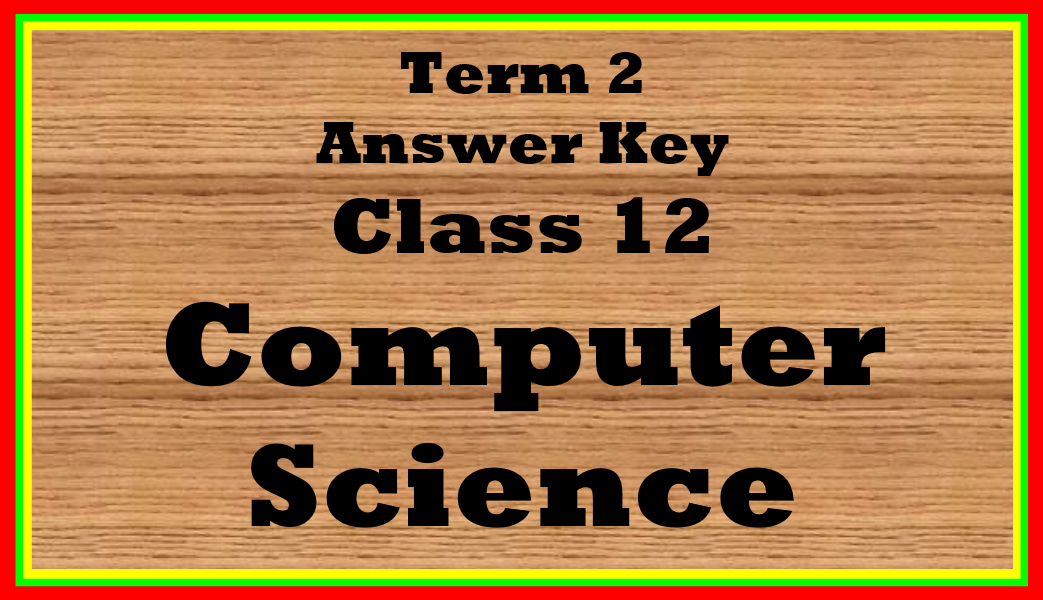 In this article, I am going to discuss the Answer key CBSE Computer Science Term 2 question paper. This is not a final marking scheme but it is prepared by us and best of our knowledge.

Let us start Answer key CBSE Computer Science Term 2 with section A. This question paper is based on CBSE Sample Paper 2022.

Watch this video for an explanation:

Name the List method/function available in Python which is used to remove the last element from a list implemented stack.

Also write an example using Python statements for removing the last element of the list.

”Show_Answer”
Ans.:
The operations are performed in a stack follows Last In First Out (LIFO) order.
The pop() method/function available in Python which is used to remove the last element from a list implemented stack.
stk.pop()

[2] (i) Expand the following: VoIP, PPP
(ii) Riya wants to transfer pictures from her mobile phone to her laptop. She uses Bluetooth technology to connect two devices. Which type of network (PAN/LAN/MAN/WAN) will be formed in this case?

[3] Differentiate between the terms Attribute and Domain in the context of Relational Data Model.

”Show_Answer”
Ans.:
The vertical data set of a relation is known as attribute. It is also known as field or property. It represents one entity. For example customerid and customername are attributes for customer relation.
The domain refers to the pool of values from which a field of a table derives its values.
Example customerid field derives its values from set of integers, customername derives from the names which are set of characters.

Assume that the required library for establishing the connection between Python and MYSQL is already imported in the given Python code. Also assume that DB is the name of the database connection for table
MEMBER stored in the database CLUB. Predict the output of the following code:

[5] Write output of SQL Queries (a) to (d) based on the table VACCINATION_DATA given below:

[6] Write the output of SQL queries (a) and (b) based on the following two tables DOCTOR and PATIENT belonging to the same database:

[7] Differentiate between Candidate Key and Primary Key in the context Relational Database Model.

(a) Identify and write the name of the most appropriate column from the given table player that can be used as a Primary Key.

(b) Define the term degree in the relational data model. What is the degree of the given table Palyer?

”Show_Answer”
Ans.:
(a) PNO
(b) Degree refers to the number of attributes or columns of the relation. The degree of table player is: 3

Now in the next section of Answer key CBSE Computer Science Term 2 I am going to discuss questions from section B which of 3 marks.

[8] Write the definition of a user-defined function PushNV (N) which accepts a list of strings in the parameter N and pushes all strings which have no vowels present in it, into a list named NoVowel.

Write a program in Python to input 5 words and push them one by one into a list named All.

The program should then use the function PushNV () to create a stack of words in the list Novowel so that it stores only those words which do not have any vowel present in it, from the list All Thereafter, pop each word from the list NoVowel and display the popped word. When the stack is empty display the message
“EmptyStack”.

If the integers input into the list NUM are

Then the stack Only3 _5 should store

And the output should be displayed as

[9] (i) A SQL table ITEMS contains the following columns:

Write the SQL command to remove the column DISCOUNT from the table.

In the next section of Answer key CBSE Computer Science Term 2 I am going to cover section C which contains 4 marks questions each. Here we go!

[11] Write SQL queries for (a) to (d) based on the tables PASSENGER and FLIGHT given below:


[12] (i) Differentiate between Bus Topology and Tree Topology. Also, write one advantage of each of them.

”Show_Answer”
Ans.:
Bus:
1. It requires a single line cable to connect all the computers in the network.
2. It is less secured compared to tree toplolgy.
3. It is very simple and easy to configure.
4. It is also known as linear topology.

Tree:
1. The comoputers are connected in hierarchical form of tree.
2. It provides high security.
3. It is largely coplex compared to bus toplogy.
4. It is also known as hierarchical topology.

OR
Differentiate between HTML and XML.

XML:
1. It stands for eXtensible Markup Language.
2. It provides framework or structure to define mark up languages.
3. It is case sensitive language.
4. XML tags are used to defined data or new tags.

(ii) What is a web browser? Write the names of any two commonly used web browsers.

”Show_Answer”
Ans.:
A web browser is a computer software or application or program, that is used to render or access the website from internet. Google Chrome and Mozilla Firefox are two commonly used web browsers.

[13] Galaxy Provider Ltd. is planning to connect its office in Texas, USA with its branch Mumbai. The Mumbai branch has 3 Offices in three blocks located at distance from each other for different operations – ADMIN, SALES and ACCOUNTS.

As a network consultant, you have to Suggest the best network-related solutions for the issues/problems raised in (a) to (d), keeping in mind the distances between various locations and other given parameters.

Layout of the Offices in the Mumbai branch:

Number of Computers installed at various locations are as follows:

(a) It is observed that there is a huge data loss during the process of data transfer from one block to another. Suggest the most appropriate networking device out of the following, which needs to be
placed along the path of the wire connecting one block office with another to refresh the signal and forward it ahead.

(b) Which hardware networking device out of the following, will you suggest connecting all the computers within each block?
(i) SWITCH (ii) MODEM (iii) REPEATER (iv) ROUTER

(c) Which service/protocol out of the following will be most helpful to conducting live interactions of employees from Mumbai Branch and their counterparts in Texas ?
(i) FTP (ii) PPP (iii) SMTP (iv) VolP

(d) Draw the cable layout (block to block) to efficiently connect the three offices of the Mumbai branch.

Follow this link for the answer key of informatics practices class 12:

I hope this article will help you to verify the answers and predict your score for term 2 computer science exam. Feel free to share your views in the comment section. Thank you for reading this!