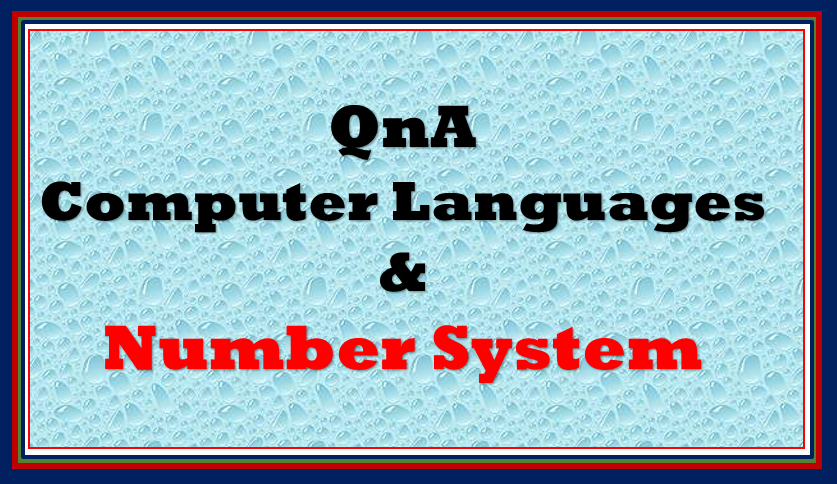 We are going to start the article with objective types questions.

In the first part we will see the answers of textbook fill in the blanks questions for QnA Number System class7.

Fill in the blanks

This part will talk about true/false types question for QnA Number System class7.

In this part of QnA Number System class7 we will see the answers of MCQs.

Coding is a process of writing a program using certain programming languages to develop an app, a game, or a software.

[2] What is a computer language?

A computer language is a system of commands used to develop programs for computer.

In other words, A computer language can be considered as a communication medium between hardware and users of computer through different scripts called programs.

A program is a sequence of statements or a script written in a particular language to give commands to fulfil user need.

Syntax is the method of writing the program. In other words, rules which are to be followed by writing program called syntax.

[4] What is source code and what is object code?

The script of a particular program is called source code. A source code will be written by a programmer or a developer.

There are three translators:

Now in the next section of QnA Number System class7 we will discuss questions and answers for number system.

Numbers are important part of any system. The representation method of numbers is called a number system.

[7] What are the three important factors of any number system?

The three important factors of any number system are:

[9] Write steps to convert a number from binary to decimal.

These steps are application to integer parts only.

[10] Write steps to convert a number from decimal to binary.

To learn more about number system, follow this link it will help for more understanding for QnA Number System class7:

[1] What are the computer languages? Explain all of them in brief.

There are three computer languages:

Machine language is a primary language of computers. It is in the form of 0s and 1s. It is executed directly without any translators in computers.

It was developed in 1950s to understand the by users. As binary language cannot be understood by everyone. So assembly language uses few of the words in English and writes the code. It requires a translator to convert the program in machine language is called assembler.

[2] What are the stages of a program execution?

It is the process of preparing a program for compilation. The source code made available in this stage for compiler to execute.

Compilation refers to testing the program for the errors. The source code put on compiler for testing and produces the results if no errors are there.

Linking is a process to convert the object code converted in compilation and generate the executable file.

When the program is ready, it needs to be loaded in to the memory for future use. This process is known as loading.