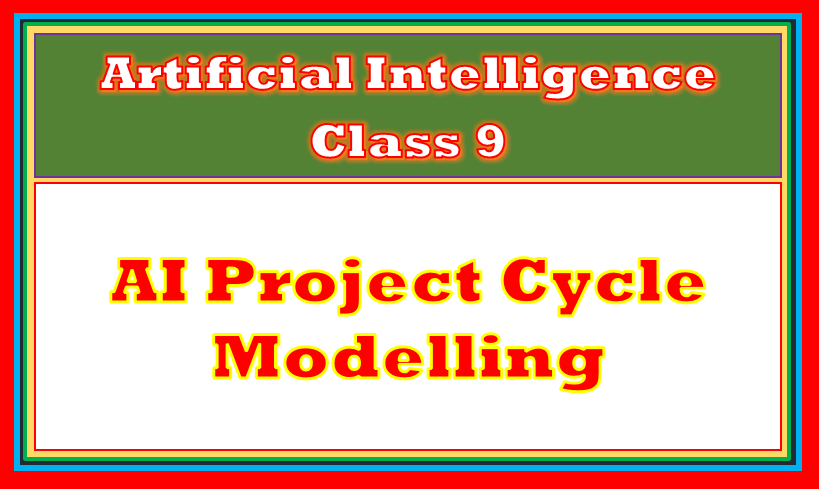 Before starting the AI project Cycle modelling class 9, you need to understand what is modelling. So it can be defined as follows:

So as in the previous article on data exploration, we have seen how we can represent data in graphics using various tools. This graphical representation makes data easy to understand for humans to take a decision or prediction. But when it comes to the machine accessing and analyse data, the machine requires a mathematical representation of data. Hence every model needs a mathematical approach to analyze data.

In the next section of AI project Cycle modelling class 9 we will talk about AI modelling approaches.

Basically, there are two approaches broadly taken by researchers for AI modelling. They are:

Let us begin with rule based approach for AI project Cycle modelling class 9.

A Rule-based approach is generally based on the data and rules fed to the machine, where the machine reacts accordingly to deliver the desired output.

Suppose you have data of 100 employees and 100 businessmen. The following steps you need to follow to train your machine:

In CBSE curriculum handbook they have following example for rule-based approach.

Suppose you have a dataset comprising of 100 images of apples and 100 images of bananas. To train your machine, you feed this data into the machine and label each image as either apple or banana. Now if you test the machine with the image of an apple, it will compare the image with the trained data and according to the labels of trained images, it will identify the test image as an apple. This is known as Rule-based approach. The rules given to the machine in this example are the labels given to the machine for each image in the training dataset. Observe the following image:

The second approach in AI project Cycle modelling class 9 is learning based discussed in the next section.

In the learning-based approach, the relationship or pattern in data is not defined by the developer. This approach takes random data which is fed into the machine and it is left to the machine to figure out the patterns or required trends.

In general this approach is useful when the data is not labelled and random for a human to use them.

Thus, the machine looks at the data, tries to extract similar features out of it and clusters the same datasets together. In the end as output, the machine tells us about the trends which are observed in the training data.

This approach is used to train the data which is unpredictable or the users have no idea about it. Let us take a look at the example given in your curriculum handbook for AI project Cycle modelling class 9.

For example, suppose you have a dataset of 1000 images of random stray dogs of your area. Now you do not have any clue as to what trend is being followed in this dataset as you don’t know their breed, or colour or any other feature. Thus, you would put this into a learning approach based AI machine and the machine would come up with various patterns it has observed in the features of these 1000 images. It might cluster the data on the basis of colour, size, fur style, etc. It might also come up with some very unusual clustering algorithm which you might not have even thought of!

In the next section of AI project Cycle modelling class 9 we will discuss about decision tree.

The decision tree is one of the most common and basic models in data science. It follows a tree like structure of the decisions with all possible results. It is similar like rule-based approach.

The decision tree is made up of various node. It follows top to bottom approach. The top most node of the decision tree is known as root. Then it continues till the down to the terminal node or leaf node. All these nodes are connected with each other by arrow lines. So let us talk about the common terms associated with decision tree.

Now we will talk about common terms of decision tree for AI project Cycle modelling class 9.

The decision tree is made up of various nodes. These nodes are the parts of a decision tree. They are as follows:

In next section we will see the practical part how to prepare a decision tree. Till then keep reading and enjoy learning.

Go through the following links: