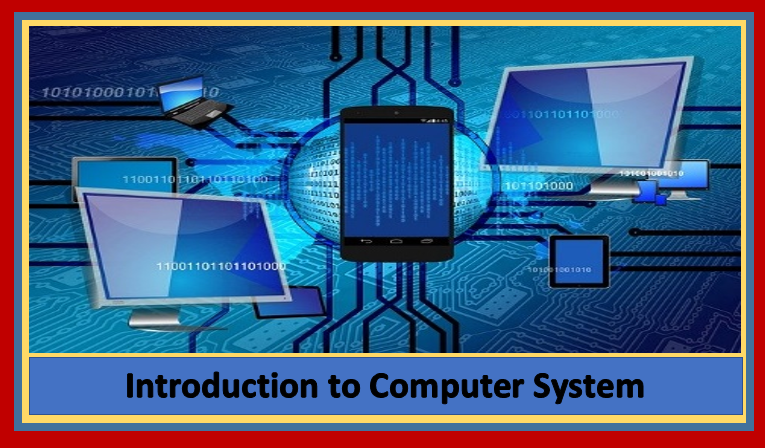 The word originates from the Latin word “Computare” which means “to calculate”. Earlier computers were used as calculating devices.

A computer is an electronic device that accepts data as input from users and gives the output after processing them.

The following words extract from the above definition and Introduction to Computer System:

As mentioned at the beginning earlier computers were used to perform simple calculations. Some of the early calculating devices also one of the important factors of Introduction to Computer System, and they are as follows:

It was the first calculating device with wooden frames along with beams sliding on wires. It was used to perform basic arithmetic operations such as addition, subtraction, multiplication, and division. It is also used to teach at early age schools to count numbers.

It was made by a Scottish mathematician named Sir John Napier in 1616. It had numbers carved on bones or strips of wood. It was also used for simple calculations. I addition to this it was used for calculating the root of the number.

It was invented by Blaise Pascal a French mathematician in 1641. It was the first mechanical calculator. It has a rectangular box with movable wheels. It was also used for simple calculations up to hundreds and thousands.

It was invented by Charles Babbage in the Nineteenth Century. It was used to prepare mathematical tables.

It was considered as the first-generation computer invented by Charles Babbage. It had some basic elements such as input, output, and memory devices.

When you are learning about Introduction to Computer System you should learn about the generation of the computers.

Computer evolution started with technology evolution. Each and every generation used different components in computers for storage of data, performing the tasks. There are five generations of computers:

Note: There are variations in generation duration by different sources.

First generations of computers very large in size as well as less memory storage. It was very expensive at that time. To input data, there were punch cards and paper tape. Vacuum Tubes were used to store data in this generation of computers.

They were small in size compared to the first generation’s computers. Transistors were used to store data on these computers. Punch cards were used for input. Ex. IBM 1401 and RCA 501

They were smaller in size, faster, cheaper, and efficient than earlier ones. They used Integrated Circuits (ICs) and Keyboard to input. They used monitors to display output. Ex. IBM 360 series and 370 Series

They are the modern computers we use today. They have microprocessors consists of ICs on a single chip called CPU. They have more storage power and computing power. Ex. IBM PC and Apple Macintosh

They have high storage capacity, high speed, and capable of performing sophisticated tasks. They involve Artificial Intelligence for computing.

Now we move ahead with Introduction to Computer System chapter with following concepts:

The computer system is a combination of a few devices. Some of the devices can be connected as and when required. So in this section let’s discuss Introduction to Computer System with computer system interconnection.

The computer system has the following internal devices:

The motherboard is a circuitry board of the computer system. All the devices are connected with this board internally or externally. It provides slots, connectors, and ports to connect devices.

It stands for switch mode power supply. It is attached with a power cable from outside and connected with the motherboard through a connector.

A hard disk is the main storage device of the computer. It is connected to the slot on the motherboard and to SMPS.

RAMs are attached to RAM slots on the motherboard.

Ports allow one to attach external devices to the computer. These ports are generally found at the backside of the cabinet. Ports have either halls or pins to attach a device.

Input Devices are used to accept data from the user. Some input devices are used to enter data directly and some devices provide a platform for input. These devices you must know for Introduction to Computer System. They are as follows:

Keyboards are necessary input devices for computers. They look like a standard typewriter. They consist of alphabets keys (a to z), numeric keys(0 to 9), ctrl, shift, alt, windows key, etc.

A mouse is a pointing device that is used to accept commands in computers through click or movement.

A scanner is used to scan either text or graphics. There are three basic types of scanners available:

It stands for Optical Character Reader. It scans only text from the document. It is faster than other scanners.

It stands for Magnetic Ink Character Recognizer. It can read graphics as well as text from the document.

It stands for Bar Code Reader. It reads a bar code sticker available with white and black strips on any product.

It is the most popular input device found on smartphones, monitors, tablets, etc. It accepts input by touching the screen. Virtual keyboards are available on-screen to enter data.

Joysticks are used to play video games on computers. They are used to control the pointers and characters of games through its buttons.

It is a digital or smartpen that is used to capture handwriting or brush stroke on the computer along with the digital notebook.

WebCam or WebCamera is a device used to capture video or images of users.

Output Devices are used to store the result of the user’s work. Let’s discuss few output devices for Introduction to Computer System. Few of them are as follows:

The monitor or VDU (Visual Display Unit) is an output device that displays data on the screen. It is available in different types such as CRT (Cathode Ray Tube), LCD (Liquid Crystal Display), LED (Light Emitting Diode).

The printer provides data on paper. It is also available in many shapes and sizes with different types such as Dot Matrix Printer, Laser Printer, Inkjet Printer, etc.

Speakers are used to listening to audio from computers. They are also available in different designs, sizes, and shapes.

The plotter is also an output device like a printer, used to print graphics from the computer.

When you are going to learn about Introduction to Computer System you must be aware about the process of deletion.

Data deletion is the process of deleting or removing data from computers. Sometimes it is required when there is no use of such data and users need free space to acquire new data. Sometimes data may be deleted due to a few reasons such as virus attack, OS files may corrupt data, etc.

How to delete data?

When the above steps followed to delete data, these data moves to the Recycle Bin. If data needs to be deleted permanently then press shift + delete or delete it from the recycle bin too.

Recovery is the process of getting data back which is deleted. Windows provides backup utilities to restore data. Apart from this system restore point is also useful for data recovery. Some external software may also help in data recovery.

A backup is a utility software to backup specific data before deletion. Users have to take their data backup at regular interval to avoid stress caused by accidental deletion. To restore backup data users must use restore tool provided by windows. Users can only restore those data in which backup has been taken.

This option allows to backup of data of the entire system. It is used to restore the system when a hard drive or computer stop working.

It is a good option to create a bootable CD or DVD for windows repair. It helps to review windows with system serious error or restores from a system image.

It allows us to create a file of data back up of specific drives. Steps to run Backup:

Security is also one of the most important aspect of Introduction to Computer System.

Security means protection of data against unauthorized access of data in computers. Windows provides the following options for data security:

Every computer consists of a username and password. Users should not share passwords with others and keep their data safe

A firewall is also one important factor for computers on the network. It checks all the process initiated by the system and provide a message to Allow or Deny to continue with the process.

Users should update windows on a regular time interval.

Users should have a strong antivirus to protect their system against viruses and keep them up to date.

Here Introduction to Computer System is completed. Thank you for reading this article.

Watch this video for an explanation of the NCERT Informatics Practices Textbook Chapter 1 Computer System.